Home / Company Blog / What Is A/B Test and How to Run Split Test on Facebook?

What Is A/B Test and How to Run Split Test on Facebook?

To do or not to do? This question shouldn’t be asked when talking of ads A/B testing. A/B — also known as split test — allows you to test several ad variations in order to determine which perform better and which of them are way too far from making WOW effect and therefore better be excluded.

To start an a/b test you make a set of ad variations within an existing campaign or in process of creating a new one. The target audience is divided into multiple equivalent groups to show each variation to different people to get relevant results. Let’s now see what and how to split test on Facebook.

A/b test can be created at all three levels of an ad campaign. Facebook ad campaign is a box of ad sets which, in turn, contain ads. At a campaign creation level you choose an objective, creating ad sets - you determine audience, schedule, budget and bid types. Ad itself is a creative users see on their mobiles and desktops. You better test one variable at a time to evaluate the result.

Ad Design and copy is probably the main point of ads split testing for most marketers as nobody knows for sure which creative is more effective until you try it. Anyway, the fact that image is at least 70% responsible for ad performance supposes a thorough research of your own perfect ad. So, to improve your Facebook advertising, you should split test different images, with and without text in it, try different colours etc.
Not less important is your ad text - different headlines, descriptions, call-to-actions will bring you different results. You should not only change words, but make different offers.

It’s important to know that if there is an ad within the ad set which is considered by Facebook as the best-performing, Facebook will optimize for showing this ad more often than the others. For this reason you need to put ad variations into different ad sets, so that Facebook won’t start the auto-optimization before you have your experiment results. But they will probably compete with one another for the same audience.

To run a Facebook split test you need not less than 4 days even though Facebook allows to run it even for just 1 day. The optimal duration of A/B testing on Facebook depends on the time the users take to convert, usually a 10-15-20 days test is enough to receive valuable results.

When it comes to results analysis, people sometimes believe that impressions or clicks number is the main characteristic to rely on. But it’s not! Measure the results by conversions. If your goal is to reach more people it may make sense, but generally your goal is to sell and you’d better have 1k clicks and 20 sales than 10k and 0 return. 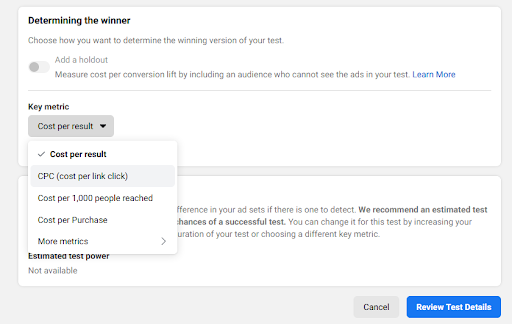 Other campaign elements you can split test on Facebook:

Placement. Sometimes your audience spends more time viewing specific pages (newsfeed, messenger) and placements testing will let you discover such pages.
Landing Page. Your ad may be great, but Landing page split testing is conducted to learn which page (homepage, product description page) of your site performs better and results in more conversions.
Bidding (Lowest Cost with or without cap). You can test if your ads performance becomes better with a bid you set yourself or with the one Facebook sets using its data to achieve the lowest price.

When it comes to an audience split test, here are the elements usually being tested:

There are a few different ways to create an A/B test in your account besides doing it in process of campaign creation: From the Ads Manager Toolbar Directly from the Experiments tool From a common scenarios prompt

When you access Ads Manager, go to the "Campaigns" tab. Under that tab, you'll see an option for "A/B Test." Keep in mind that you'll need to have an existing ad campaign to complete the test. 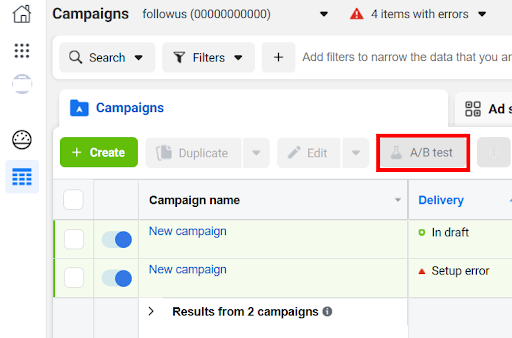 Another way is to proceed to Facebook business menu -> Analyse and report -> Experiments -> A/b test. This test won’t be reflected in your Ads Manager. This option is useful due to the flexibility of fine-tuning your ad campaigns before starting a test, or when you want to use several existing ad campaigns for the test. 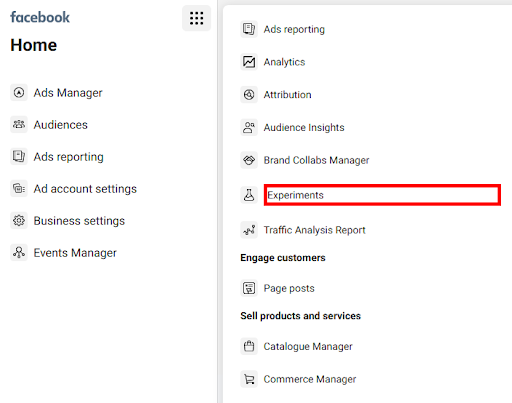 Sometimes during your ad campaign running you can occasionally receive some test recommendations. Some of these scenario prompts that may appear include:

Once you create a scenario-based test, you’ll be able to review the results of this scenario test in Experiments.

As you can see, Facebook ads ab testing is a worthy opportunity and a way to increase ROI and reduce ads costs. You just need to keep in mind that over testing can end up in too narrowed reach per ad set which will make your ad campaign very expensive.